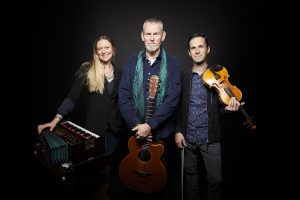 Described by Songlines magazine as a “Welsh supergroup”, ALAW is three leading musicians who bring a wealth of experience to a shared passion – the traditional music of Wales. Nia Lynn’s exceptional voice and harmonium dance with the dazzling fiddle of Oli Wilson-Dickson, interwoven with Dylan Fowler’s sparkling guitar playing. Whether unearthing rare gems or reimagining a well loved song, they treat their music with a deftness and sensitivity that is thoroughly absorbing. Combined with powerful song writing and original tunes, this makes for a musical experience that will stay with the listener long after the performance ends. 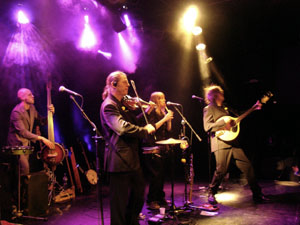 The Churchfitters is a folk band like no other. A bass guitar made out of a frying pan. Heart-wrenching vocals accompanied by a musical saw. Foot-stompingly fast fiddle mixed with infectious funk-rock bouzouki. And traditional tunes reinvigorated with mesmerising jazz sax.

The three virtuoso musicians from England and France strut their stuff on a stage that bristles with instruments – adding flute, banjo, dulcimer, tin whistle, guitar, ukulele, stand up dustbin bass and a sackful of percussion to their ensemble. And let’s not forget the unique ‘bing-bong’ machine made out of hack-saw blades.

Throw in some exquisite harmonies, a slew of startlingly original songs and a few jokes that create instant rapport and you’ve got a high energy show that always leaves audiences cheering. How do you adequately describe such a musically diverse, uplifting band? You leave it to Mike Harding, a self-confessed ‘huge, huge fan’. He calls them ‘totally brilliant and beautiful’. 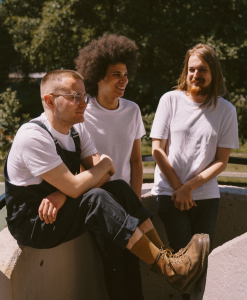 With exceptional musicianship and boundless energy, Granny’s Attic are Cohen Braithwaite-Kilcoyne (melodeon, anglo concertina, vocals), George Sansome (guitar, vocals) and Lewis Wood (violin, vocals). The trio have been heralded for their lively performances and skilled delivery of traditional material, playing with verve, energy and their own inimitable style. Though grounded in tradition, they are keen to push new boundaries by exploring fresh approaches and writing their own compositions 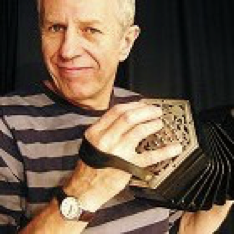 John is one of the most prolific figures on the English folk scene, performing solo, in duos, acoustic groups and electric bands, and has established an enviable reputation as an instrumental virtuoso and session musician, as well as a leading interpreter of English folk music. He has been a member of the Albion Country Band, Magic Lantern, The Richard Thompson Band, Umps and Dumps, Steeleye Span, Brass Monkey, Trans-Europe Diatonique, and Band of Hope, as well as numerous ceilidh bands. 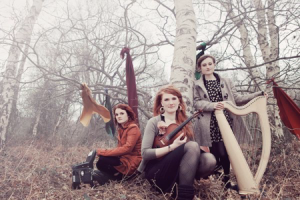 In an English folk scene currently bursting with bold and innovative folk music, vocal trio Lady Maisery shine brightly. With their unique approach to harmony singing, intelligent and thoughtful arrangements of both traditional repertoire and original compositions, Hazel Askew, Hannah James and Rowan Rheingans harness and celebrate their united voice. Whether unearthing a feminist twist hidden in a traditional tale, delivering a poignant anti-war ballad, or showcasing their immense multi-instrumental talents in original compositions that draw on a myriad of musical influences, Lady Maisery are skilful explorers of the power, beauty and vitality of song. Over the last five years, the trio have toured widely, performing sell-out shows across the UK and Europe. 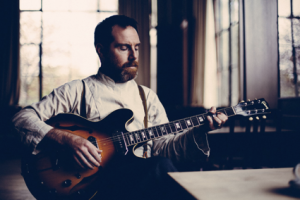 A BBC award winning folk musician and former Riverdance band member who has performed with Ian Anderson of Jethro Tull, Cara Dillon and De Dannan. Folk Musician in Residence of the Scottish National Museum of Rural Life and tutor on the traditional music course at Royal Conservatoire Scotland in Glasgow. His 2015 album of melodeon music transcribed from early wax cylinders and 78s was described in the Scotsman as “outstanding.” A soloist on the Lord of the Rings and The Hobbit soundtracks he performed at the Royal Festival Hall with the London Philharmonic Orchestra. His commissioned work for the PRS for Music New Music Biennial in 2014 was broadcast live on BBC Radio 3 from London’s Barbican Centre and Glasgow Royal Concert Hall. He has performed at the Edinburgh Festival’s Assembly Rooms and on Broadway with Riverdance. His musical partnership with the School of Philosophy at Edinburgh University culminated in sell out shows at Celtic Connections Festival on two consecutive years with Songs of the Scottish Enlightenment. He recently sang and played live for Mark Radcliffe on his BBC Radio 2 folk programme and was described by Mark as a “master melodeon player.” 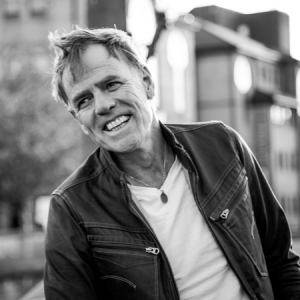 Martyn Joseph is a performer like no other: Shades of Springsteen, John Mayer, Bruce Cockburn and Dave Matthews there may be – but he stands in his own right, built on a reputation for giving what thousands have described as the best live music experience of their lives delivering his “songs of lyrical intelligence” according to BBC Radio 2’s Bob Harris. 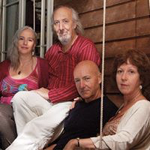 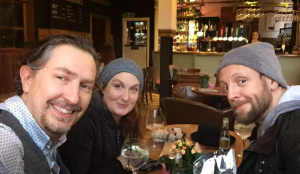 Outstanding musicianship, a lifelong grounding in traditional singing and instrumental playing, acclaimed original compositions and most noticeably a visceral chemistry make them a perennial favourite at festivals, venues and clubs across the country. Add to that the fact that they have unearthed the legendary Tim Van Eyken who guests with them in what is a bit of a scoop for Gower Folk Festival 2022. 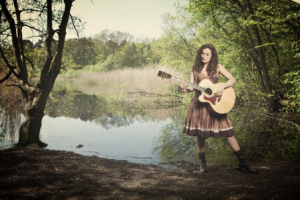 Odette Michell is a British folk singer-songwriter, guitarist and bouzouki player with a bold new take on the acoustic tradition and a voice capable of demonstrating the finer points of both folk and traditional song with genuine craftsmanship. Her vocal style has been described as “warm, intelligent and sitting comfortably amidst folk guitar in a timeless songwriting style” – and has been compared to the likes of Sandy Denny and Joni Mitchell. 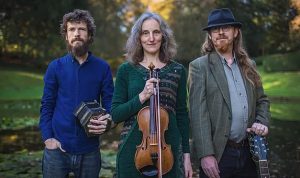 Owl Light Trio are an instrumental group based in Oxfordshire.

We take good tunes to pieces and put them back together again.

Sometimes the insides end up on the outside.

At other times the tunes will seem to go back together seamlessly, until we find a stray note or two in a pocket or under the sofa.

Tunes treated in this way often reveal hidden passageways, trapdoors, overgrown gardens and forgotten attics. When these turn up we like to explore them thoroughly. 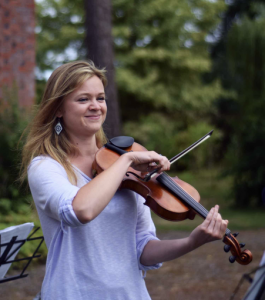 Phoebe Rees is a musician and songwriter from Oswestry. Influenced by a diverse range of musical genres and cultures, she predominantly combines elements of Celtic, English and American Folk traditions into her music making. Drawing on inspiration from her early years in the Scottish Highlands, experiences as a classical viola player studying in Edinburgh and London, and subsequent travels throughout the rest of the British Isles, Europe, South America and India; she performs her own compositions along with interpretations of material by other artists close to her heart. Phoebe sings and accompanies herself mostly on the fiddle, viola and guitar. 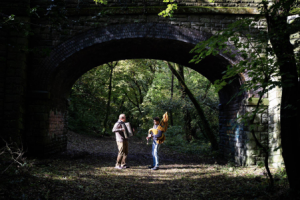 Hailing, respectively, from Poland and the north-west Spanish region of Galicia, Michał Poręba and Gerardo Albela have, between the two of them, lived embedded in at least seven different cultures and speak seven different languages. They also come from very different musical backgrounds, the first from a classical upbringing, the second from a tradition-based approach.

Together, they drink from all those experiences and mix all those differences to put together a musical experience that will take you from the roots of their different folklores through to their own compositions, flowing from the simple to the elaborate.

Their music will make you feel, it will make you think, it might make you cry… but it will surely make you smile… and stamp your foot on the ground too. 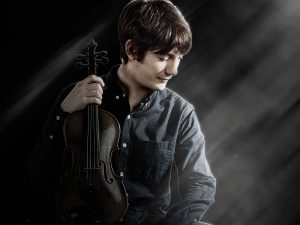 Ryan Young brings new and exciting ideas to traditional Scottish music, receiving international praise for his spell-binding interpretations on the fiddle. Focussing on traditional Scottish music, Ryan brings new life to very old, often forgotten tunes by playing them in his own unique way. His fiddle playing is brimming with fresh melodic ideas, an uplifting rhythmic drive and a great depth of dynamics and precision. His sound is very distinctive and takes the listener on an emotional and adventurous journey in any performance. Ryan studied and graduated with a first class honours degree in Scottish Music from The Royal Conservatoire of Scotland and has now also completed his Master’s in Music. Ryan is a two time BBC Radio 2 Young Folk Award nominee, a Celtic Connections Danny Kyle Award winner and was as a finalist in BBC Radio Scotland Young Traditional Musician 2015 and 2016. 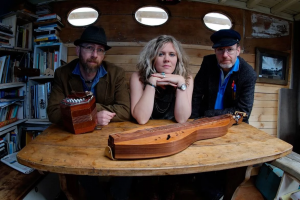 Three Legg’d Mare are an Aberystwyth band who were brought together by a common interest in the traditional songs and tunes of Wales, England and far beyond, and the social history and folklore that lies behind them. They sing old songs of madness, love, death, adventure and everyday life, intertwined with traditional tunes – and some original compositions. With lively and sensitive interpretations, close vocal harmonies and a multitude of instruments, Three Legg’d Mare chart a course through folk history with a passion and verve that’s earning them a growing following throughout Wales and the borders. 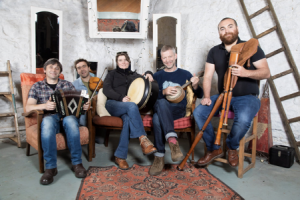 A collective of uninhibited musical adventurers playing self-penned and traditional music from anywhere, with a winning mix of bonhomie and grit. Born out of friendship, the five-piece play naturally social music – for filling dancefloors, for listening, for drinking with friends – but don’t expect it to merge into the background. This is raunchy, up-all-night, joyously jugular-grabbing dance music. 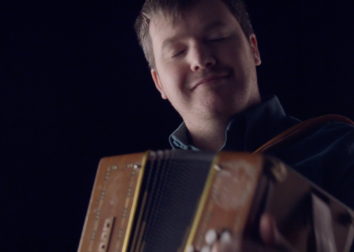 One of the finest harmonica and melodeon players of his generation, Will Pound has pushed the boundaries, working with a number of projects and musicians including Will Pound and Eddy Jay, Jenn Butterworth, Dame Evelyn Glennie, Liz Carrol, Martin Simpson, Guy Chambers, Concerto Caledonia, Robbie Williams and The Hillsborough Charity Single. He has travelled across most of Europe and as far as Australia for his music, delighting and giving audiences awe-inspiring performances.